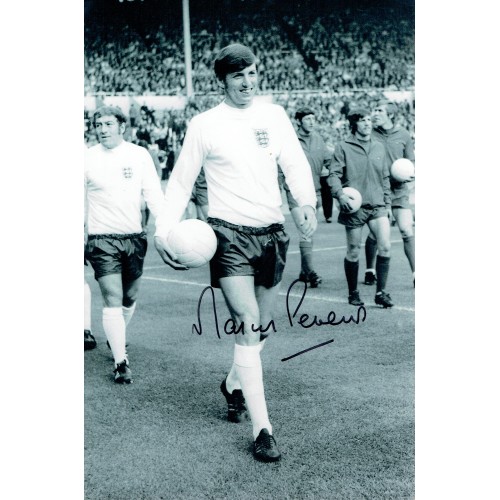 A rare 8x12 inch photograph of Martin Peters walking out on the hallowed turf of Wembley Stadium for England in the 1966 Cup Final, signed by Martin Peters in black marker pen.

Martin was a member of the victorious England team which won the 1966 World Cup.

Martin Stanford Peters MBE (born 8 November 1943- 21st December 2019) was an English former footballer and manager and a member of the England team which won the 1966 FIFA World Cup as well as playing in the 1970 FIFA World Cup. Born in Plaistow, Essex, he played club football for West Ham United, Tottenham Hotspur, Norwich Cityand Sheffield United. He briefly managed Sheffield United before retiring from professional football in 1981.

Saadly In 2016, it was announced that Martin had Alzheimer's disease.