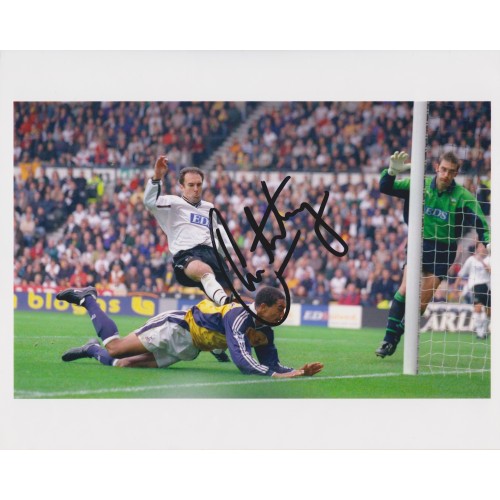 A 10 x 8 inch colour photograph signed by Chris Armstrong in black marker pen. Christopher Peter "Chris" Armstrong (born June 19, 1971 in Newcastle upon Tyne, Tyne and Wear) is an English former England B international football player who has played as a striker for Wrexham (twice), Millwall, Crystal Palace, Tottenham Hotspur and Bolton Wanderers between 1989 and 2005. After short spells with Wrexham and Millwall, Armstrong found a home at Selhurst Park, where he top-scored with 23 league goals as Palace were promoted to the Premiership. In March 1995, Armstrong tested positive for cannabis, becoming the first ever Premiership player to fail a drug test. However, he had returned to the game within a month after attending a brief rehab programme. He finished the season on 16 goals, not enough to save the Eagles from relegation. He then joined Tottenham for a fee of £4.5 million, and became, and remained for some time, Tottenham's biggest transfer, replaced only by the signing of Les Ferdinand for £6 million in 1997 (he was record- holder for Palace's most expensive player sold for even longer - only Andrew Johnson, sold for £8.6 million in 2006, has surpassed him). Armstrong's time at Spurs was not as successful as he might have hoped. Although a reasonably frequent scorer, he never managed to gain the level of popularity that the likes of Gary Lineker and Teddy Sheringham had during their time at the club. He rounded out his career with two more unsuccessful spells, at Bolton and back at Wrexham, before retiring.