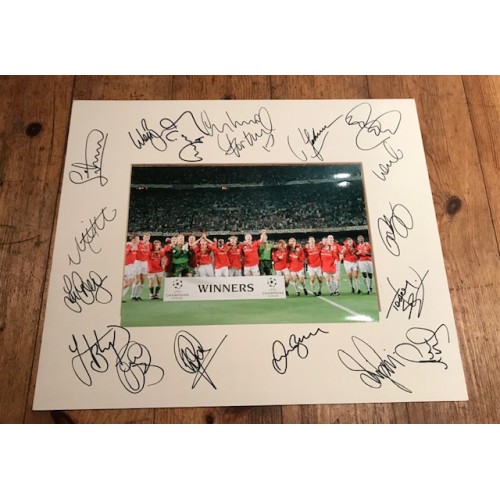 Manchester Utd Mount Signed By 18 Players From The 1999 Treble Winning Squad including:

The 1998–99 season was the most successful season in the history of Manchester United Football Club. After finishing the previous season without winning any titles, United won the treble of trophies (the Premier League, FA Cup and UEFA Champions League), the first side in English football to achieve such a feat. During the campaign United lost only five times, including a one-off Charity Shield fixture, in the League Cup against eventual winners Tottenham Hotspur and their only home defeat, a league match against Middlesbrough in December 1998 and two away defeats to Arsenal and Sheffield Wednesday in September and November respectively. A run of 33 games unbeaten in all competitions began on 26 December at home to Nottingham Forest.