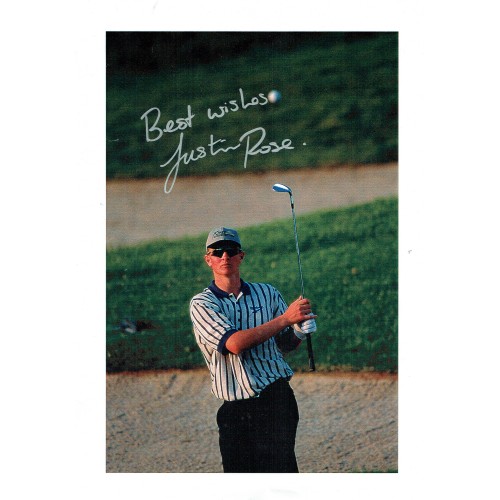 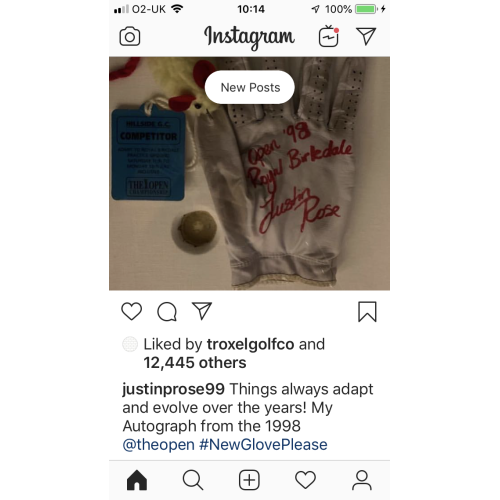 Justin Rose 1998 British Open Championship At Royal Birkdale, playing from a bunker in the 2nd Round. He was the Leading Amateur. The image is on A4 shiny paper. Signed by Justin Rose adding Best Wishes in silver marker pen very rare as you can see from Justin Rose own twitter account of his early signature and his remark "Things always adapt and evolve over the years! My Autograph from the 1998 @theopen #NewGlovePlease".

Justin Peter Rose (born 30 July 1980) is a South African-born English professional golfer who plays most of his golf on the PGA Tour, while keeping his membership on the European Tour. He won his first major championship at the 2013 U.S. Open at Merion Golf Club, becoming the first English player
to win a major since Nick Faldo in 1996 and the first to win the U.S. Open since Tony Jacklin in 1970. He first came to prominence as an amateur at the 1998 Open Championship where he holed a dramatic shot from the rough at the final hole to finish in a tie for fourth place. He won the 2007 Order of Merit on the European Tour and was ranked in the World top ten for 34 weeks between November 2007 and July 2008. In March 2012, Rose won his first World Golf Championship event at the WGC-Cadillac Championship and as a result he re-entered the world top-10. After finishing second to Tiger Woods in the 2013 Arnold Palmer Invitational, he rose to a career high world ranking of number 1 in 2018.