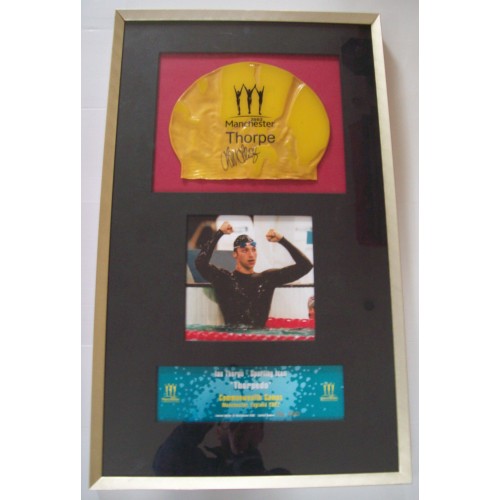 A yellow personalised swimming cap display from the 2002 Manchester Commonwealth Games, signed by Ian Thorpe in black marker pen, laid down to mount above colour photo of Thorpe celebrating in the pool, Limited Edition 136/500, framed and glazed (please note frame has a few digs and marks so not in perfect condition could do with re-framing, but mount is ok).

Ian Thorpe (born 13 October 1982) is an Australian swimmer who specialises in freestyle, but also competes in backstroke and the individual medley. He has won five Olympic gold medals, the most won by any Australian, and with three gold and two silver medals, was the most successful athlete at the 2000 Summer Olympics. At the 2001 World Aquatics Championships, he became the first person to win six gold medals in one World Championship. In total, Thorpe has won eleven World Championship golds, the third-highest number of any swimmer.