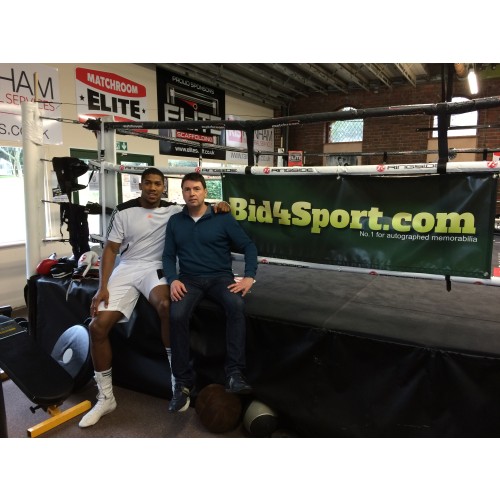 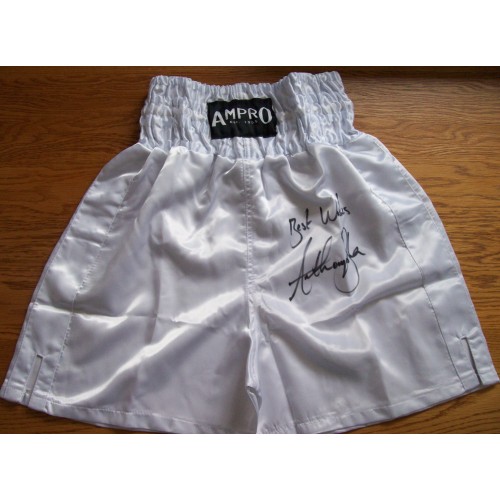 A pair of boys large Ampro Boxing trunks signed by Anthony Joshua at our exclusive private signing session on the 16th February at the Matchroom Gym.

Anthony Oluwafemi Olaseni Joshua, MBE (born 15 October 1989) is a British professional boxer. He is currently a unified world heavyweight champion, having held the IBF title since 2016, the WBA (Super) and IBO titles since 2017, and the WBO title since 2018. At regional level he held the British and Commonwealth heavyweight titles from 2014 to 2016.

Joshua represented England at the 2011 World Championships as an amateur in the super-heavyweight division, winning a silver medal; he also represented Great Britain at the 2012 Olympics, winning gold. In 2014, a year after turning professional, he was named Prospect of the Year by The Ring magazine. In 2017, Joshua's victorious fight against Wladimir Klitschko was named Fight of the Year by The Ring and the Boxing Writers Association of America. Joshua is the second British boxer, after James DeGale, to win both a gold medal at the Olympics and a world title by a major professional sanctioning body, as well as being the first British heavyweight to do so.

As of February 2018, Joshua is ranked as the world's best active heavyweight by The Ring, the Transnational Boxing Rankings Board, and BoxRec. Known for having exceptional punching power, he has finished all but one of his fights to date by knockout.