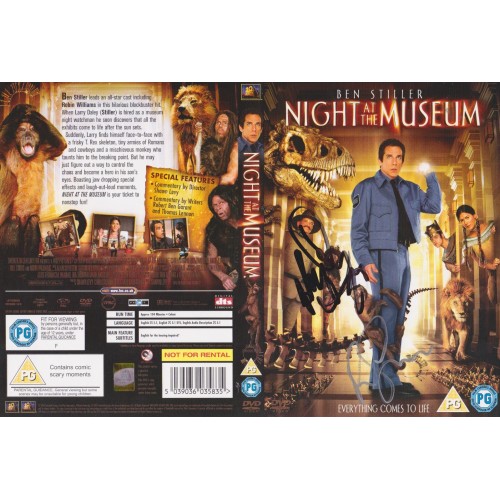 This signed DVD cover is The first film in the series.

Night at the Museum is a 2006 American fantasy adventure-comedy film based on the 1993 children's book of the same name by Milan Trenc. It follows a divorced father trying to settle down, impress his son, and find his destiny. He applies for a job as a night watchman at New York City's American Museum of Natural Historyand subsequently discovers that the exhibits, animated by a magical Egyptian artifact, come to life at night. Released on December 22, 2006 by 20th Century Fox, the film is a 1492 Pictures /21 Laps Entertainment Production, in association with Ingenious Film Partners. It was written by Robert Ben Garant and Thomas Lennon of Comedy Central's Reno 911! and MTV's The State and produced and directed by Shawn Levy. Also producing for 1492 Pictures were Chris Columbus and Michael Barnathan. The film stars Ben Stiller, Carla Gugino, Dick Van Dyke, Mickey Rooney, Bill Cobbs, Jake Cherry, Ricky Gervais, Owen Wilson, Steve Coogan, and Robin Williams. A novelization of the screenplay, by Leslie Goldman, was published as a film tie-in.