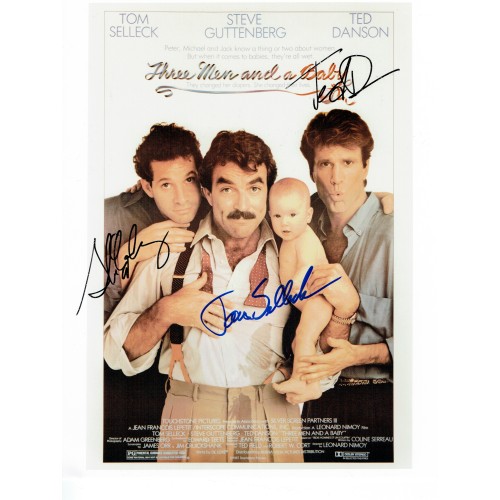 Three Men and A Baby Signed 8X10 Photo by Tom Selleck, Steve Guttenberg & Ted Danson, rare to have all three of the main stars.

Three Men and a Baby is a 1987 American comedy film directed by Leonard Nimoy, and stars Tom Selleck, Steve Guttenberg, Ted Danson and Nancy Travis. It follows the mishaps and adventures of three bachelors as they attempt to adapt their lives to pseudo-fatherhood with the arrival of the love child of one of them. The script was based on the 1985 French film Trois hommes et un couffin (Three Men and a Cradle). The film was the biggest American box office hit of that year, surpassing Fatal Attraction and eventually grossing US$167 million in the US alone. The film won the 1988 People's Choice Award for Favorite Comedy Motion Picture.