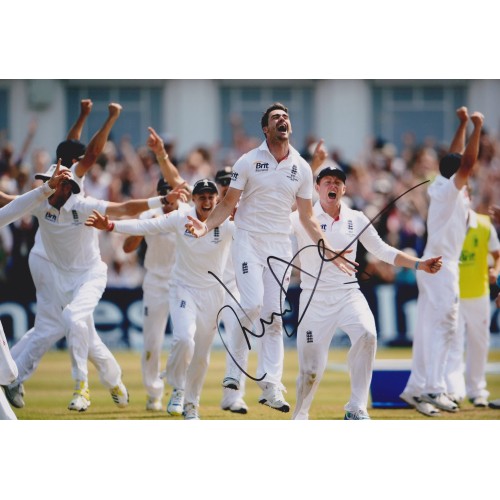 An 8x12 inch photograph of Jimmy Anderson celebrating winning the first Test in The 2013 Ashes series which went right down to the wire, signed by Jimmy Anderson in black marker pen.

James Michael "Jimmy" Anderson (born 30 July 1982 at Burnley, Lancashire, UK) is an English international cricketer. Anderson plays first-class cricket for Lancashire and since arriving on the international scene in 2002/03, before his first full season of County cricket, Anderson has represented England in over 90 Test matches and over 160 One Day Internationals. He is England's all-time highest international wicket-taker when combined across all three formats, and only the fourth English bowler to take 300 Test wickets. He and Joe Root posted the highest ever 10th-wicket batting partnership in the 1st Test of India's 2014 tour of England. A right-arm pace bowler, Anderson made his international debut at the age of just 20. On England's 2002/03 tour of Australia, Anderson was drafted into the squad from the England A team due to an injury crisis. When he played his first ODI he had only played five senior One-Day matches. Anderson went on to feature in the 2003 ICC World Cup and made his Test match debut against Zimbabwe at Lord's the next summer. Later in 2003 he experienced a dip in form and confidence against South Africa. After this he was in and out of the team and experienced numerous injuries, including a stress fracture of the back which kept him out of action for most of the 2006 season. He returned to action and features regularly in England's Test squad.