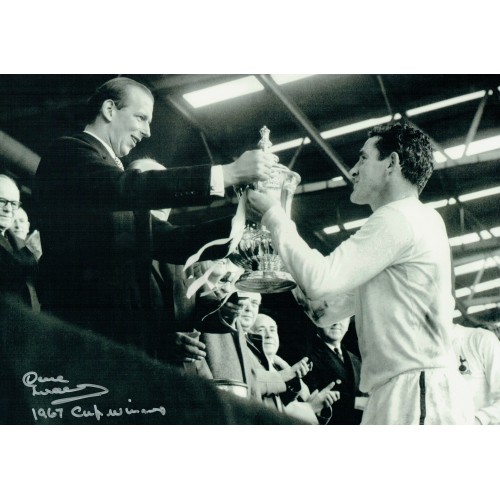 Bid now for this 12x16 inch photograph of Dave Mackay receiving the FA Cup in 1967 signed Dave Mackay 1967 Cup Winners in silver marker pen.
David Craig Mackay (14 November 1934 – 2 March 2015) was a Scottish football player and manager. Mackay was best known for a highly successful playing career with Heart of Midlothian, the Double-winning Tottenham Hotspur side of 1961, and winning the league with Derby County as a manager. He also represented Scotland 22 times, and was selected for their 1958 FIFA World Cup squad. Mackay tied with Tony Book of Manchester City for the Football Writers' Association's Footballer of the Year award in 1969 and was later listed by the Football League in their "100 Legends", as well as being an inaugural inductee to both the English and Scottish Football Halls of Fame. He was described, by Tottenham Hotspur, as one of their greatest players.