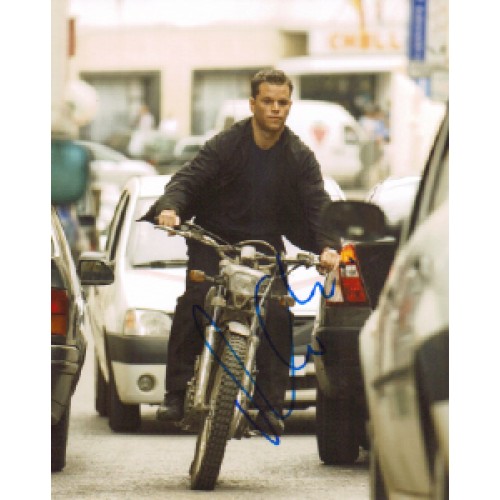 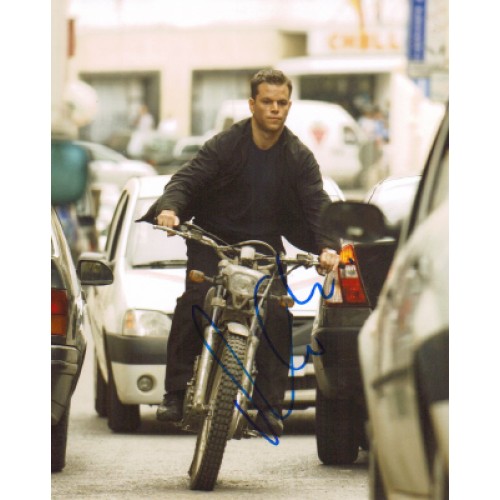 Matt Damon in action from Bourne movie a 10x8 photograph signed by Matt Damon in blue marker pen. Matt is an American actor, screenwriter, and philanthropist whose career was launched following the success of the film Good Will Hunting (1997).

The Bourne films are a series of action spy thriller films based on the character Jason Bourne (Matt Damon), a CIA assassin suffering from extreme memory loss who must figure out who he is, created by author Robert Ludlum. All three of Ludlum's novels were adapted for the screen, featuring Matt Damon as the title character in each. Doug Liman directed The Bourne Identity (2002) and Paul Greengrass directed The Bourne Supremacy (2004), The Bourne Ultimatum (2007) and Jason Bourne (2016). Tony Gilroy co-wrote each film except for Jason Bourne and directed The Bourne Legacy (2012). Damon chose not to return for the fourth film, The Bourne Legacy, which introduces a new main character, Aaron Cross (Jeremy Renner), a Department of Defense operative who runs for his life because of Bourne's actions in Ultimatum. The character of Jason Bourne does not appear in Legacy, but mention of his name and pictures of Damon as Bourne are shown throughout the film. Damon returned for the fifth installment, Jason Bourne. The Bourne series has received generally positive critical reception and grossed over $1.6 billion. It is noted for its use of real stunt work, in contrast to the growing use of computer-generated imagery in action scenes.