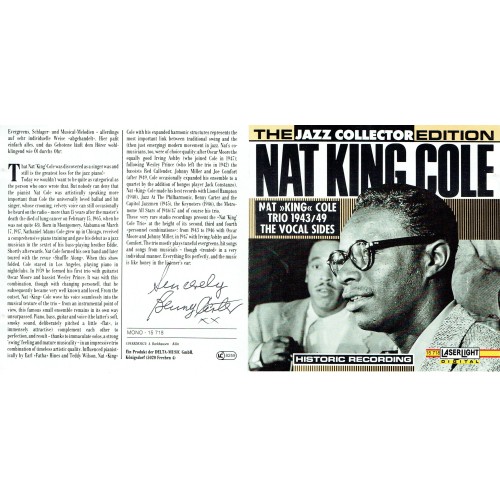 Bennett Lester "Benny" Carter (August 8, 1907 – July 12, 2003) was an American jazz alto saxophonist, clarinetist, trumpeter, composer, arranger, and bandleader. He was a major figure in jazz from the 1930s to the 1990s, and was recognized as such by other jazz musicians who called him King. Carter performed with major artists from several generations of jazz, and at major festivals, such as his 1958 appearance with Billie Holiday at the Monterey Jazz Festival. The National Endowment for the Arts honored Benny Carter with its highest honor in jazz, the NEA Jazz Masters Award for 1986. He was awarded the Grammy Lifetime Achievement Award in 1987, and both won a Grammy Award for his solo "Prelude to a Kiss" and received a star on the Hollywood Walk of Fame in 1994. In 2000 awarded the National Endowment for the Arts, National Medal of Arts, presented by President Bill Clinton.