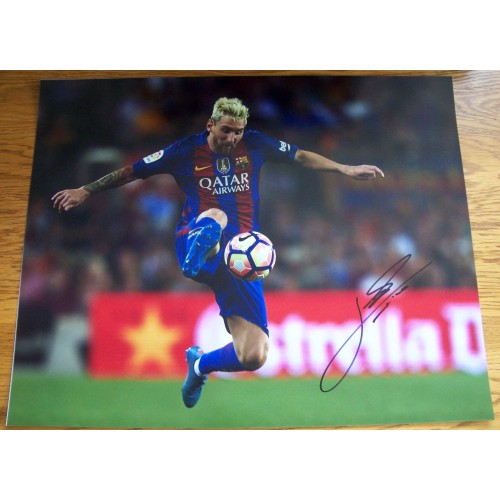 Lionel Messi autograph a 16x20 inch photograph of the greatest footballer to have lived in action for FC Barcelona fantastic signature.

Lionel Andrés "Leo" Messi Cuccittini  (born 24 June 1987) is an Argentine professional footballer who plays for Spanish club FC Barcelona and the Argentina national team. He is a forward and serves as captain for Argentina.

By the age of 21, Messi had received Ballon d'Or and FIFA World Player of the Year nominations. The following year, in 2009, he won his first Ballon d'Or and FIFA World Player of the Year awards. He followed this up by winning the inaugural FIFA Ballon d'Or in 2010, and then again in 2011 and 2012. He also won the 2010–11 UEFA Best Player in Europe Award. At the age of 24, Messi became Barcelona's all-time top scorer in all official club competitions. In September 2014 he scored his 400th senior career goal for club and country aged just 27. In November 2014, Messi became the all-time top scorer in La Liga, and the all-time leading goalscorer in the UEFA Champions League.