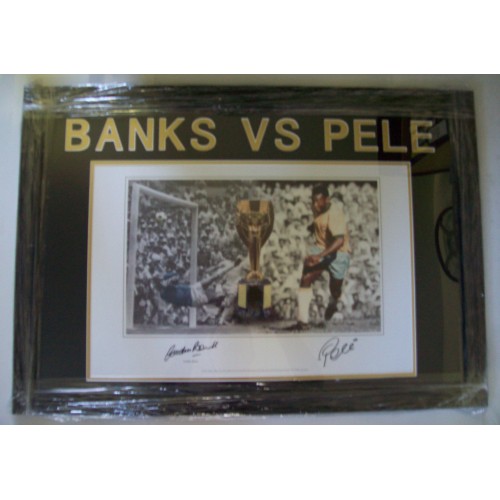 BANKS VS PELE framed display 'The Greatest Everv Save' 12x16 photo from the 1970 World Cup Finals where Brazil dfeated England 0-1, signed by the Pele & Gordon Banks in black marker pen.

Edson Arantes do Nascimento( born 23 October 1940), known as Pelé , is a retired Brazilian professional footballer who played as a forward. He is widely regarded to be the greatest player of all time. In 1999, he was voted World Player of the Century by the International Federation of Football History & Statistics (IFFHS). The same year, France Football asked their former Ballon d'Or winners to choose the Football Player of the Century; they selected Pelé. In 1999, Pelé was elected Athlete of the Century by the IOC, and Time named him in their list of 100 most influential people of the 20th century. In 2013 he received the FIFA Ballon d'Or Prix d'Honneur in recognition of his career and achievements as a global icon of football

Gordon Banks elected in a poll by the IFFHS as the second best goalkeeper of the 20th Century  after Lev Yashin (1st) and before Dino Zoff (3rd). Banks was a member of the England national team that won the 1966 World Cup. His consistent performances in goal led to the re-wording of a common English idiom to "Safe as the Banks of England".