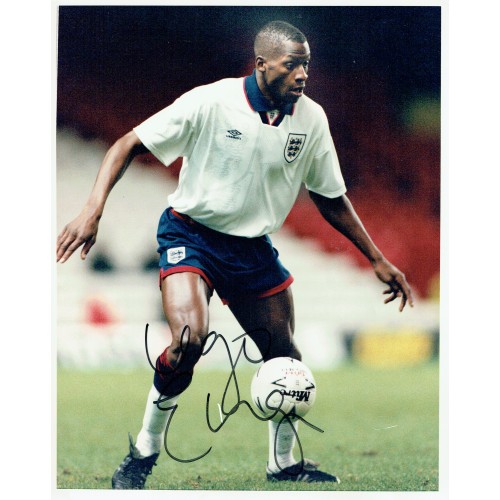 Ugo Ehiogu Signed 10x8 England B Photograph when England defeated The Republic of Ireland 2-0 at Anfield, please note slight scratches to photo, but this is a very rare photograph signed item.

Ugochuku Ehiogu (3 November 1972 – 21 April 2017) was an English professional footballer who played as a centre back from 1989 to 2009. He was the coach of the Tottenham Hotspur U23 team until his death in April 2017. He played in the Premier League with lengthy spells at Aston Villa and Middlesbrough. He also played in the Football League for West Bromwich Albion, Leeds United and Sheffield United, as well as a spell in the Scottish Premier League with Rangers. He won two Football League Cups, with Aston Villa in 1996 and then with Middlesbrough in 2004. Ehiogu was an England international, with a record of 4 caps and 1 goal. In 1993, playing for the England under-21 team, he became the first black player to captain an England team in a competitive match. In 2012, he came out of brief retirement by signing for non-league side Wembley to participate in the club's FA Cup games alongside other retired veteran players.