Marlon Brando Signed Off White Page & Photo From THE WILD ONE 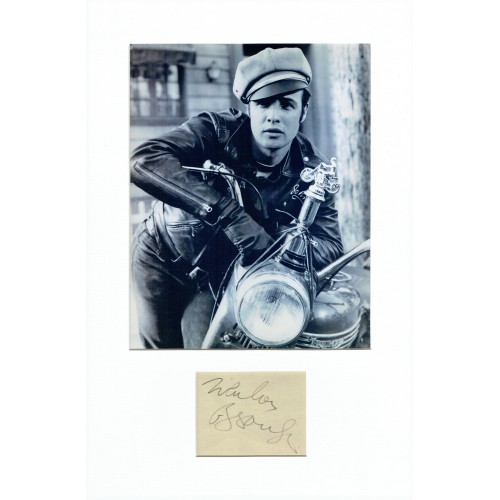 Marlon Brando Ink signature ('Marlon Brando') on off-white card, mounted for display with a black and white photograph OF MARLON BRANDO IN THE WILD ONE, overall size 16 x 12 inches.

The Wild One is a 1953 American film noir crime film directed by Laszlo Benedek and produced by Stanley Kramer. It is most noted for the character of Johnny Strabler (Marlon Brando), whose persona became a cultural icon of the 1950s. The Wild One is considered to be the original outlaw biker film, and the first to examine American outlaw motorcycle gang violence.

The film's screenplay was based on Frank Rooney's short story "The Cyclists' Raid," published in the January 1951 Harper's Magazine and anthologized in The Best American Short Stories 1952. Rooney's story was inspired by sensationalistic media coverage of an American Motorcyclist Association motorcycle rally that got out of hand on the Fourth of July weekend in 1947 in Hollister, California. The overcrowding, drinking and street stunting were given national attention in the July 21, 1947, issue of Life, with a staged photograph of a wild drunken man on a motorcycle.The events, conflated with the newspaper and magazine reports, Rooney's short story, and the film The Wild One are part of the legend of the Hollister riot.