Michael J Fox Signed 12x16 'Back To The Future' Photograph 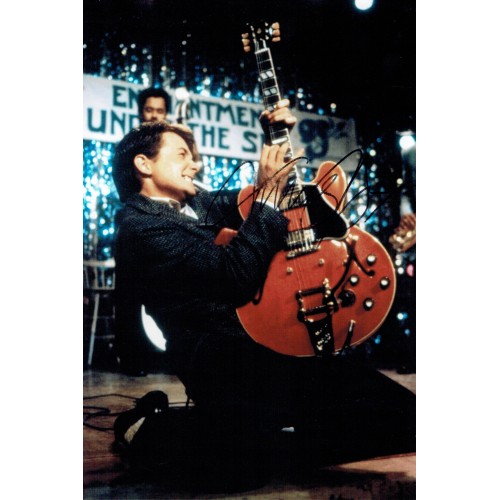 Michael J Fox Signed 12x16 'Back To The Future' playing the guitar photograph extremely rare signature due to his ailing health with Parkinson's disease.

Michael J. Fox, OC (born Michael Andrew Fox; June 9, 1961) is a Canadian-American actor, author, producer, and advocate. With a film and television career spanning from the 1970s, Fox's roles have included Marty McFly from the Back to the Future trilogy (1985–1990); Alex P. Keaton from Family Ties (1982–1989), for which he won three Emmy Awards and a Golden Globe Award; and Mike Flaherty in Spin City (1996–2001), for which he won an Emmy, three Golden Globes, and two Screen Actors Guild Awards.

Fox was diagnosed with Parkinson's disease in 1991 and disclosed his condition to the public in 1998. Fox semi-retired from acting in 2000 as the symptoms of his disease worsened. He has since become an advocate for research toward finding a cure; he created the Michael J. Fox Foundation, and on March 5, 2010, Sweden's Karolinska Institutet gave him a honoris causa doctorate for his work in advocating a cure for Parkinson's disease