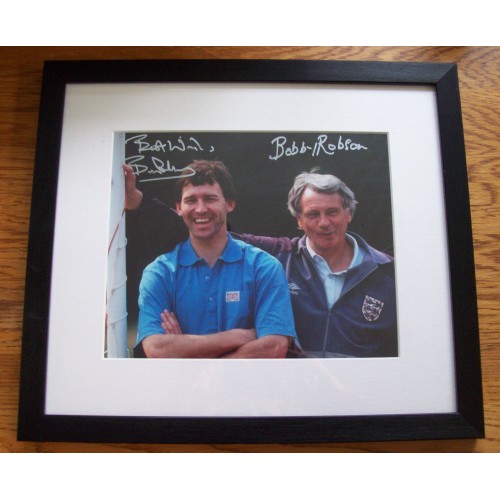 Great photograph of Sir Bobby Robson with 'Captain Marvel' Bryan Robson during training ahead of the 1990 World Cup.

Bryan Robson OBE (born 11 January 1957) is an English football manager and former player. Born in Chester-le-Street, County Durham, he began his career with West Bromwich Albion in 1972 before moving to Manchester United in 1981, where he became the longest serving captain in the club's history and won two Premier League winners' medals, three FA Cups, two FA Charity Shields and a European Cup Winners' Cup. In August 2011, Robson was voted as the greatest ever Manchester United player in a poll of the club's former players as part of a new book, 19, released to celebrate the club's record-breaking 19th league title. Bryan Robson represented England on 90 occasions between 1980 and 1991, making him, at the time, the fifth most capped England player. His goalscoring tally of 26 placed him eighth on the list at the time. Robson captained his country 65 times, with only Bobby Mooreand Billy Wright having captained England on more occasions. Robson is also known by the nicknames "Robbo" and "Captain Marvel". Bobby Robson stated that Robson was, along with Alan Shearer and Kevin Beattie, the best British player he ever worked with.