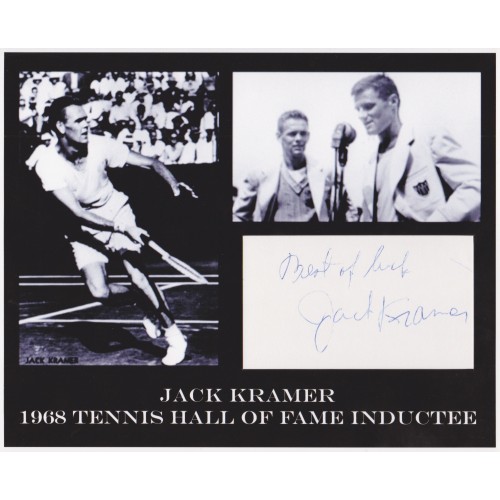 An 8x10 inch mounted display with cut signature of Jack Kramer the 1947 Wimbledon champion after being inducted in to the 1968 Tennis Hall of Fame.

John Albert Kramer (August 1, 1921 – September 12, 2009) was an American tennis player of the 1940s and 1950s. A World No. 1 player for a number of years, and one of the most important people in the establishment of modern men's "Open"-era tennis, he was the leading promoter of professional tennis tours in the 1950s and 1960s. He was a relentless advocate for the establishment of Open Tennis between amateur and professional players. An International Tennis Federation (ITF) proposal to introduce Open tennis lost by five votes in 1960, but became a reality in 1968. In 1970, he created the Mens Grand Prix points system. In 1972, he helped found the Association of Tennis Professionals (ATP) with Donald Dell and Cliff Drysdale, and was the first Executive Director. He was unpaid at his request. In that role, he was the leader of an ATP boycott of Wimbledon in 1973, for the banning of Nikola PiliÄ‡ from the tournament.