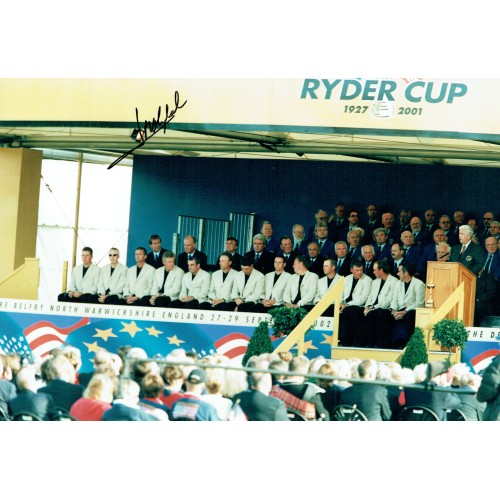 From the Bruce Malcolm photograph collection, Jose Maria Olazabal signed this for Bruce.

The 34th Ryder Cup Matches were held 27–29 September 2002 in England, on the Brabazon Course at The Belfry in Wishaw, Warwickshire (near Sutton Coldfield). The European team won the competition which was played at The Belfry.

The event was originally scheduled for 28–30 September 2001 but was postponed for a year on 16 September following the September 11 attacks. "The PGA of America has informed the European Ryder Cup Board that the scope of the last Tuesday's tragedy is so overwhelming that it would not be possible for the United States Ryder Cup team and officials to attend the match this month." The manager of Phil Mickelson and Mark Calcavecchia had earlier announced that the two players would not travel to Europe. Other American players were said to be concerned about attending the event. It was agreed that the same captains and players would participate in the 2002 event.

José María Olazábal Manterola (born 5 February 1966) is a Spanish professional golfer who has enjoyed success on both the European Tour and the PGA Tour, and has won two major championships, both at The Masters.In 2012 he captained Europe's Ryder Cup team to a narrow victory over the USA.