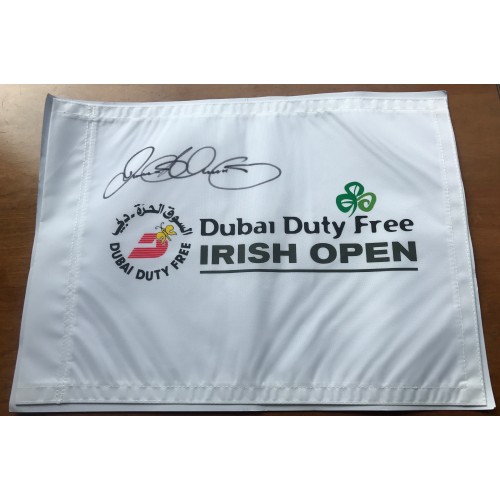 An official Irish Open Dubai Duty Free Golf Flag signed by Rory MciLroy in black marker pen, the signature is a rare full un-rushed signature and was obtained at 10am on 4th October by his agent at his home in Holywood Northern Ireland.
Rory McIlroy, MBE (born 4 May 1989) is a Northern Irish professional golfer from Holywood in County Down who is a member of both the European and PGA Tours. He is the current World Number One and a four-time major champion. He won the 2011 U.S. Open, setting a record score of 16-under-par on his way to an eight-stroke victory. The following year he won the 2012 PGA Championship at Kiawah Island by a record eight strokes for his second major championship victory. He won his third major, the 2014 Open Championship and the US Open for the second time winning back to back majors, becoming the first European to win four different majors, and joined Jack Nicklaus and Tiger Woods as one of three golfers to win three majors by the age of 25. He has been cited as the most exciting young prospect in golf and as having the potential to become one of the highest earners in sports in terms of endorsements. McIlroy has represented Europe, Great Britain & Ireland, and Ireland as both an amateur and a professional. He had a successful amateur career, topping the World Amateur Golf Ranking for one week as a 17-year-old in 2007. Later that year he turned professional and soon established himself on the European Tour. He had his first win on the European Tour in 2009, and on the PGA Tour in 2010. He represented Europe in the 2010 and 2012 Ryder Cup. In 2011 at the age of 22, he became the youngest player ever to reach $10 million in career earnings on the European Tour. In 2012 he became the youngest player to reach $10 million in career earnings on the PGA Tour. SportsPro has McIlroy rated as the third most marketable athlete in the world. In January 2013 he signed a large endorsement deal with Nike.