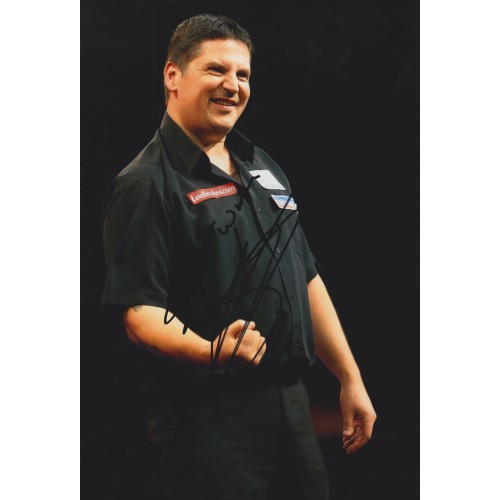 An 8x12 photograph of Gary Anderson in action. Signed Best Wishes Gary Anderson (A dedication has been wiped off and is visable in certain light conditions but is hardly noticable).

Gary Anderson New 2015 PDC World Darts Champion (born 22 December 1970) is a Scottish professional darts player from Eyemouth, Scottish Borders, currently playing in the Professional Darts Corporation, and a former BDO and WDF world number one. His nickname is The Flying Scotsman. He is renowned for his heavy scoring in the game, and has been touted as a future world champion. He is also known for having one of the best, smoothest throws in the game. However, he is perhaps best known for beating Phil Taylor in the final of the World Darts Trophy in 2007, reaching the final of the PDC World Championship in 2011, and winning the Premier League in 2011. In 2014 he picked up his second major PDC title and fourth in total by winning the Players Championship Finals.