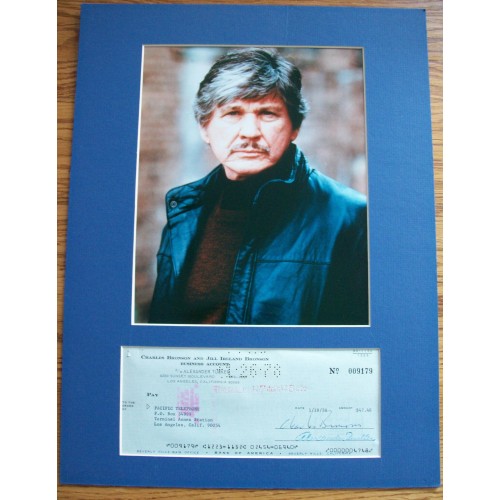 A cheque from the Charles Bronson & Jill Ireland business account signed by Charles Bronson together with a facismile signature of Alexander Tucker dated 19th January 1978. The cheque is mounted with a colour portrait 10 x 8 inch photo, mounted to an overall size of 16 x 12 inches.

Charles Bronson (November 3, 1921  August 30, 2003) was an American actor best known for his "tough guy" image, who starred in such classic films as Once Upon a Time in the West, The Magnificent Seven, The Dirty Dozen, The Great Escape, The Evil That Men Do and the popular Death Wish series. He was most often cast in the role of a police officer or gunfighter. Bronson's first film role was as a Polish sailor in You're in the Navy Now in 1951, he also made several appearances on television in the 1950s and 1960s. Bronson was nominated for an Emmy Award for his supporting role in a TV episode with the title "Memory in White." In the 1970s he became one of the top ten box-office stars. He made films in many genres including crime, western and others. Bronson's last starring role in a theatrically released film was 1994's Death Wish V: The Face of Death. His health deteriorated in later years, and he retired from acting after undergoing hip- replacement surgery in 1998. Bronson also suffered from Alzheimer's disease in his final years.