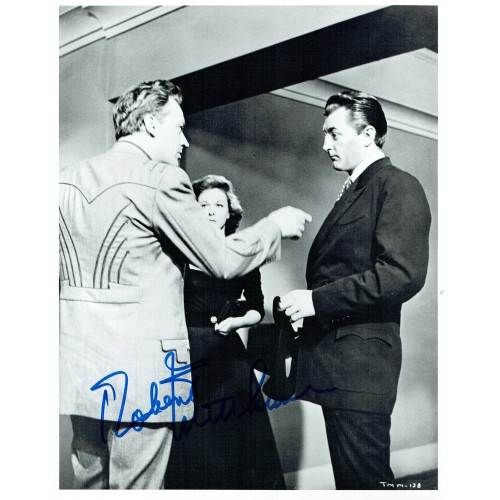 Robert Mitchum autograph signed 8x10 photograph from the movie The Lusty Men the image is showing a scene of Robert Mitchum as Jeff McCloud with Susan Haywood as Louise Merritt & Arthur Kennedy as Wes Merritt. Signed by Robert Mitchum in blue marker pen.

The Lusty Men is a 1952 western film made by Wald-Krasna productions and RKO Radio Pictures. The film stars Susan Hayward, Robert Mitchum, Arthur Kennedy, and Arthur Hunnicutt. It was directed by Nicholas Ray and produced by Jerry Wald and Norman Krasna from a screenplay by David Dortort, Horace McCoy, Alfred Hayes, Andrew Solt, and Jerry Wald based on the novel by Claude Stanush. The music score was by Roy Webb and the cinematography by Lee Garmes. The film's world premiere was at the Majestic Theatre in San Antonio, Texas.

Robert Charles Durman Mitchum (August 6, 1917 – July 1, 1997) was an American actor, director, author, poet, composer, and singer. Mitchum rose to prominence for starring roles in several classic film noirs, and his acting is generally considered a forerunner of the antiheroesprevalent in film during the 1950s and 1960s. His best-known films include Out of the Past (1947), The Night of the Hunter (1955), Cape Fear (1962), and El Dorado (1966). Mitchum was nominated for the Academy Award for Best Supporting Actor for The Story of G.I. Joe(1945). He is also known for his television role as U.S. Navy Captain Victor “Pug” Henry in the epic two-part miniseries The Winds of War (1983) and sequel War and Remembrance (1988).

Mitchum is rated number 23 on the American Film Institute's list of the greatest male stars of Classic American Cinema.