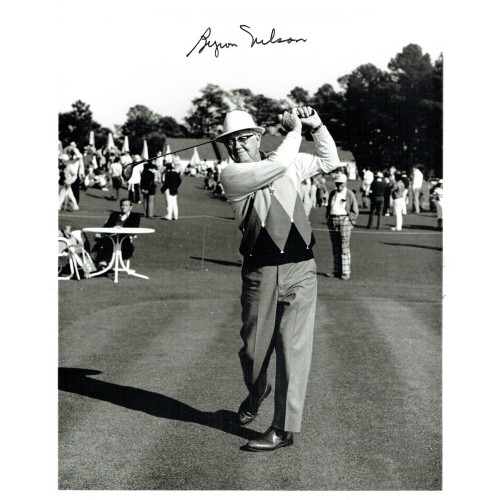 Byron Nelson autographed photograph,ORIGINAL 10” x 8” BLACK AND WHITE PHOTOGRAPH DEPICTING BYRON NELSON IN FULL LENGTH GOLF POSE ON COMPLETION OF A DRIVE. BEAUTIFULLY AUTOGRAPHED IN BLACK INK TO THE CLEAR PORTION OF THE IMAGE BY BYRON NELSON, excellent condition.John Byron Nelson, Jr. (February 4, 1912 - September 26, 2006) was an American professional golfer between 1935 and 1946, one of the greats not only in his day but over the history of the sport. Although he won many tournaments in the course of his relatively brief career, he is mostly remembered today for having won 11 consecutive tournaments and 18 total tournaments in 1945.