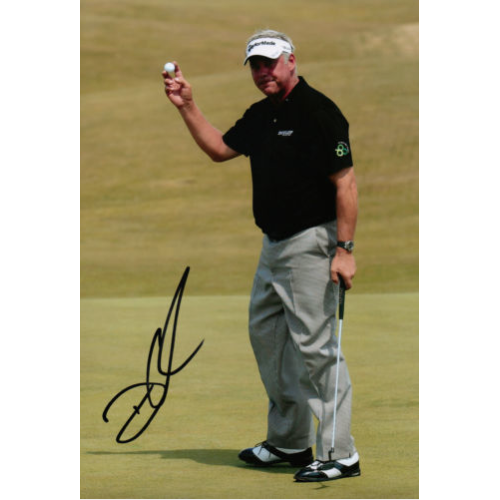 An 8x12 inch photograph of Darren Clarke during The 2011 Open at Royal St George's where Darren was victorius. Signed by Darren Clarke in black marker pen.

Darren Christopher Clarke, OBE (born 14 August 1968) is a professional golfer from Northern Ireland who currently plays on the European Tour and has previously played on the PGA Tour. He has won 22 tournaments worldwide on a number of golf's main tours including the European Tour, the PGA Tour, the Sunshine Tour and the Japan Golf Tour. His most notable win came at Royal St George's where he won the 2011 Open Championship, his first major win after more than 20 years and 54 attempts. Clarke has also won two World Golf Championship events, most notably the 2000 WGC-Andersen Consulting Match Play Championship where he squared off with, and defeated, Tiger Woods.