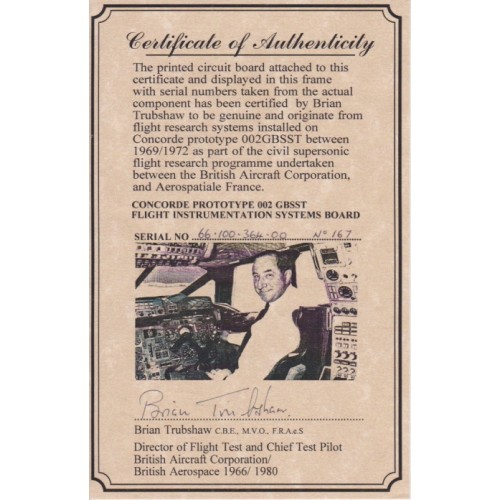 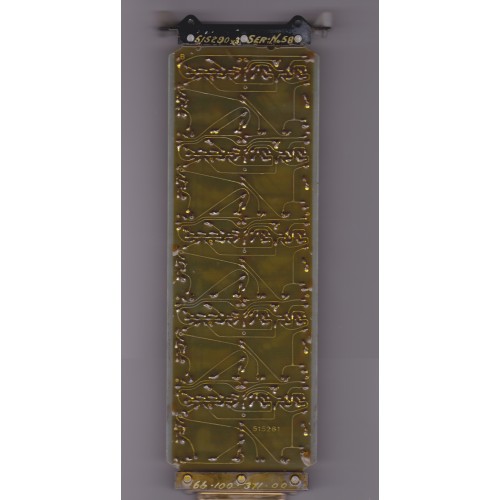 Concorde Circuit Board 2 & Brian Trubshaw signed COA. British Airways Concorde 002 printed circuit board Version 1. This circuit board was one of the very instruments that were fitted to Concorde 002 to make that historical flight. This circuit board was authenticated by Brian Trubshaw to be genuine and originate from flight research systems installed on Concorde prototype 002 GBSST between 1969/1972 as part of the civil supersonic flight research programme undertaken between the British Aircraft Corporation and Aerospatiale France. Brian has personally signed a Certificate of Authenticity to accompany this circuit board. This is a genuine autograph/signature by Brian Trubshaw and not a printed copy, this signature alone is very unique and has to be just as collectable as this circuit board. Concorde 002 made her first UK test flight on 9th April 1969 by BACs' chief test pilot Brian Trubshaw; Brian flew Concorde 002 from Filton to Fairford. Brian Trubshaw was the first British pilot to fly Concorde in April 1969. Trubshaw, who sadly passed away on 25 March 2001, shot to fame when he first flew Concorde in April 1969 on a flight from Filton to its Test base at RAF Fairford. He emerged from Concorde 002's then futuristic cockpit with the words: 'it was wizard a cool, calm and collected operation.’ The measurements of the circuit board are approximately 11.5 inches x 4.25 inches. Serial No's on back:515290x3 SER:No.58 & 66.100.371.00.