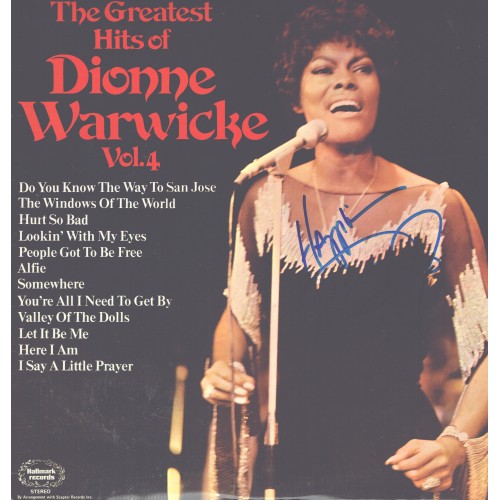 Dionne Warwick signed Greatest Hits of Dionne Warwick LP-Cover. signed by Dionne adding Happiness Dionne in blue marker pen (signature is clearer than the image shows on screen). The 33 Vinyl is included inside please note album not played so cant guarantee the record nis not scratched (but looks ok to me).

The glue has released from holding the front to the back cover at the opening end but is till intact, just needs a little bit of glue.

Marie Dionne Warwick (Warrick; born December 12, 1940) is a six-time Grammy Award-winning singer, actress, television host, and former United Nations Global Ambassador for the Food and Agriculture Organization and United States Ambassador of Health. Warwick ranks among the 40 biggest hit makers of the entire rock era (1955-1999), based on the Billboard Hot 100 Pop Singles Charts. She is one of the most-charted female vocalists of all time, with 56 of her singles making the Billboard Hot 100 between 1962 and 1998, and 80 singles making all Billboard charts combined.