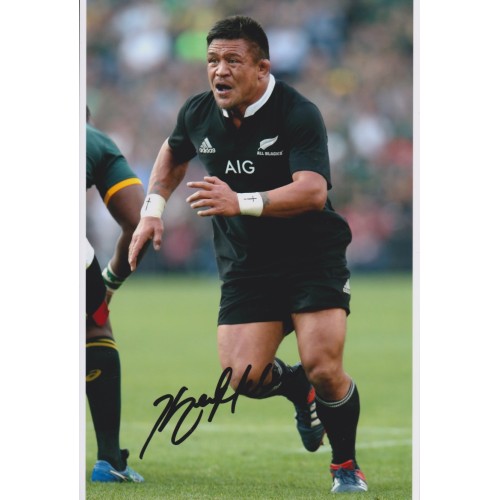 An autographed 8x12 inch photograph of Keven Mealamu in action for The All Blacks signed in black marker pen.
One of the true gentlemen of world rugby, Keven Mealamu is New Zealand’s most-capped Super Rugby player of all time. The powerful hooker and Test centurion again demonstrated his consistently high standards throughout 2014. Mealamu led his young Blues side from the front with a series of impressive performances and has yet again been a steadfast presence in the All Blacks. He was a standout performer in the All Blacks RWC 2011 success, turning out in six matches in the Tournament and captaining the side against Japan. His 2012 Investec Super Rugby season has been disrupted by injury and he will be raring to go against the Irish if he gets the chance. Keven has been wearing the black jersey since 1995, when he turned out for New Zealand Under 16. Despite the long career his passion for rugby and the respect with which he is regarded by teammates and opponents remains undimmed. Mealamu took on a new leadership role in 2006, captaining the Blues through a challenging Rebel Sport Super 14 campaign. During 2005, the livewire hooker delivered several stand-out performances for the All Blacks, including a match-winning try against South Africa at Dunedin and the clincher against England at Twickenham in November. An accurate lineout thrower and strong scrummager, Mealamu is equally comfortable in the running game, where his skills and background make him almost a fourth loose forward.Mealamu scored three tries in his first seven games for the Blues in the 2007 Rebel Sport Super 14 after scoring four in 70 previous matches.In 2008 Mealamu again featured heavily in the All Blacks, featuring in every test match, competing with Hurricanes hooker Andrew Hore over this time, and often coming off the bench as the ultimate impact forward.